The history of Het Nutshuis

Het Nutshuis forms an important part of the history of the Haagse Nutsspaarbank. The monumental building served as the head office of this bank from 1921 until 1992.

In late 1894, the first building that the Haagse Nutsspaarbank commissioned for itself was completed on the corner of Westeinde and Jan Hendrikstraat. The board of the bank had started out in the city hall and later moved to premises that used to be owned by a carpenter.

But this magnificent bank building only adorned the street scene for ten short years. It was demolished when the municipality of The Hague decided to widen Jan Hendrikstraat. In addition, the municipality had plans to build a square on Westeinde, which meant that various houses and buildings had to make way. They included the ten-year-old premises of the Nutsspaarbank. 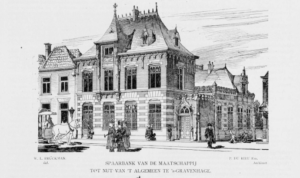 The first Nutsspaarbank building on Westeinde.

The board of the bank went in search of a new location close to home. The ‘mad house’ to the rear of the building on Westeinde was duly purchased in 1913.

A lot of time passed between the moment the intention to build new offices was first made known and the actual laying of the first stone. The municipality first announced the building plans in 1911, but the first stone of Het Nutshuis wasn’t laid until 1920. 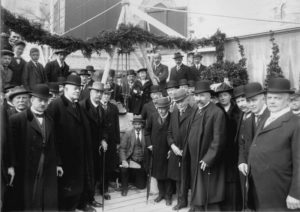 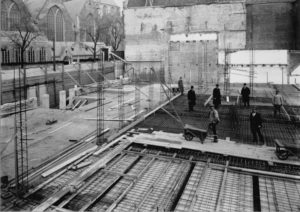 There were several reasons for the long delay before the start of building work. First of all, it took a few years for the municipality to work out the practical details of its plan. It wasn’t until 1914 that the bank set up a building committee to decide where the new head office should be built and how big it needed to be.

The Hague-based architect Samuel de Clercq sat on this committee as advisor. In April 1914, the architect presented two different ideas: one for a smaller building intended solely for the bank, and one for a larger building, which gave scope for hiring out part of the premises.

The committee was divided on the matter. Some of the members were worried about the risks and security problems of letting tenants into the bank building. Others saw it as a way of generating new income. After much debate, the committee chose the second proposal. De Clercq went back to the drawing board and came up with two designs for a building with two floors.

Tensions within Europe rose in the summer of 1914, when Franz Ferdinand of Austria was assassinated. The outbreak of World War I caused a dilemma for the bank; would it be wiser to invest in the building of new offices, or should they hang on to their savings?

But the board had other distractions. When war was declared, savers started withdrawing their money from the bank en masse, and the bank had its work cut out trying to keep control of the situation. A year later, the committee still hadn’t decided on the design. Things finally came together in September 1915, when the municipality indicated its desire to push through the building plans.

As the bank’s original building was being demolished against its will, the board demanded fair compensation from the municipality. But the war had made building materials increasingly scare and the price of land was dropping. The municipality postponed any decision in 1916, and De Clercq’s definitive design was finally approved in January 1917.

Despite the fact that De Clercq had altered and toned down his design, the building materials were still too expensive. The job was only contracted out in October 1919, after the war had finished. The first task was to demolish the old building. When this had been completed, the first stone of Het Nutshuis was finally laid on 20 April 1920. 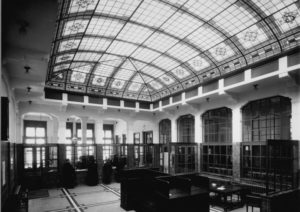 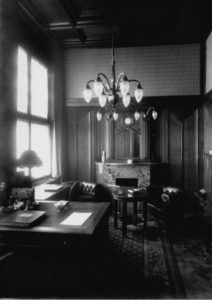 The construction of Het Nutshuis took a staggering 116 weeks. This was partly because of strikes. The facades were built first, followed by the interior walls. The highest point was reached on 4 November 1920, when the two main roof rafters were put in place. Two months later, two chimneys were built on the roof, and an iron billboard stating ‘1818 Hoofdkantoor Nutsspaarbank 1921’ appeared on the building’s facade.

This marked the start of the next phase. The priority shifted to the interior design of the building and the construction of the safes. The interior created a serious, solemn atmosphere. The original plans had included a lift, but this was eventually scrapped in view of the cost. In addition, simplicity was of the essence, so some of the old furniture was renovated and re-upholstered.

The boardroom and the bank manager’s office were, however, furnished with new oak furniture. A modern central internal telephone exchange was fitted, along with a vacuum cleaner and clock system. And then, on 17 December 1921, the new building was ceremoniously opened by the Chairman J.H. Andries and the Mayor J. Patijn.

On the right: a picture of the manager’s office.

The Hague newspaper Het Vaderland published a glowing review of the brand-new Nutshuis building. The newspaper printed the following description, taken from a brochure published for the opening:

“The public enter a spacious banking hall, with a glass roof providing ample natural daylight. Two foundation stones have been bricked into the long side of the banking hall; one refers to the foundation of the bank and its sub-offices, and the other one refers to the people who contributed to the development of the building. The service counters are on the left of the banking hall. On the right is a reading desk, where the accountant can sit and supervise the staff. The main body of the safe, where ledgers and valuable papers are stored securely and safe from fire, is in the middle of the building and occupies three floors. The cloakroom and the coffee area for staff are at the front on the right. To the left is the waiting room and the manager’s office. Around the outside is a corridor allowing the manager access to all the offices out of sight of the public. The office with the counting machine on the Jan Hendrikstraat-side of the building has been fitted with double glazing to keep the noise to a minimum. The centrally placed stairs lead from manager’s office to the boardroom on the first floor. Several rooms on the first floor and in the basement have been left vacant to accommodate the expected corporate growth.’’

Put to new use

The bank left Het Nutshuis in 2002. The building underwent extensive renovations and re-opened its doors in 2006. Since then, it has served as multi-tenant premises for social organisations and a venue for social and cultural gatherings. The building is still owned by Fonds 1818. 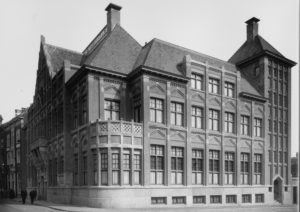